MOTD (Mani of the Day)

In honor of the area that I live in entering its second straight week of excessive heat advisories I decided to do a manicure in its honor.  When I asked my husband what nail polish I should do today he said this one, since he liked the swatch I did on my nail wheel a little bit ago, so I figured it was fate.
I got this idea originally from MaD Manis.  Here it is. 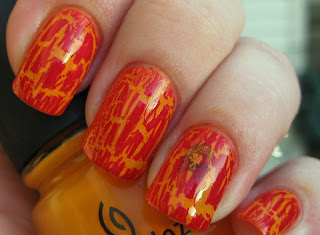 For this I used China Glaze Papaya Punch, which is a medium yellow orange from their Summer 2011 collection.  I only bought this color because I found it on clearance at Sally's Beauty, and because I wanted to try this manicure.  Oranges and yellows do absolutely nothing with my skin tone except make it look terrible, I figured the red crackle would counteract that horribleness and for the most part it did.

Speaking of crackle, I will be the first to admit that I am not real fond of them, it's not that I dislike them per se, just that I didn't find them nearly as exciting as everyone else did.  I always thought they made your nails look like they were falling off, especially the black crackle over red polish, very gory.  Anywho, since I'm not a real big fan of crackle there was no way I was spending $6-$8 for a bottle of something I knew I would hardly ever use.  Then along came Pure Ice Crackle, only $4 a bottle, so I picked up Show Stopper for the sole purpose of doing this manicure.  I like the way that it turned out, looks like lava, which is what the air feels like outside right now, so I consider it appropriate.

This mani is 2 coats of base including Essie Beam Up, one coat of Papaya Punch, it's extremely pigmented so I really only needed one coat since I knew I was going to layer crackle over it.  If I was going to wear it alone (not likely) I would have added a second coat just to even a little pulling at the cuticle out, but Papaya Punch can definitely be a careful one-coater.  I waited for the Papaya Punch to completely dry and then put a thin coat of Show Stopper over the top.  They key to getting decent cracks on your crackle polish is to apply it quickly and try not to go over an area you have already polished.  I find that thin coats work best and crackle the most, the thicker the coat the less it will crack.  It also cracks mostly in the direction that you apply it, I applied from the cuticle to the tip so most of my cracks are running down the nail vertically.  If I had applied horizontally across the nail most of the cracks would have been horizontal.  This crackle dried quickly and matte, as do most crackles, so I applied a coat of Seche Vite for the shiny.

That weird black mark on my ring finger is an Ed Hardy nail tattoo, it didn't show up like it was supposed to, I got them for $.50 on clearance at Sally's.  It's a skull and crossbones with fire around it, but duh, fire isn't going to show up on an orange and red manicure, so I just ended up with the skull and cross bones.  I keep thinking it's a smudge and trying to rub it off when I catch it out of the corner of my eye lol.  I like this mani on me a lot more than I thought I was going to so I may keep it for a few days.

That's all I have for now, thanks for stopping by, until next time.
Posted by HotwheelinBetty at 9:18 PM